The Bronze Age site of Korisha, was investigated in 2006, research excavations carried out through trial trenches. The site is situated on the eastern slope of the horse saddle shape hill near the Korisha antique castle. The settlement measures an approximate area of 1 hectare, with the highest elevation point recording 728 meter, and the lowest 723 meters above the sea level.

The settlement was a typical fortified site, protected by nature in one side, and traverses on the other sides. The archaeological test excavations carried out at this locality at two sections, resulted with the documentation of typical Bronze Age dwellings, confirming the life continuity during the early and middle Bronze Period. Among the discovered movable archaeological material, the most worth mentioning ones are; stone tooled utensils, fragments of various earthenware and other smaller findings, typical for this period. 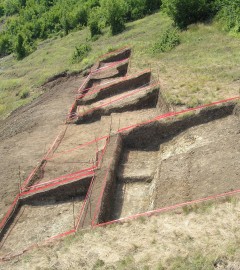