Remains of the Korisha Fortress with The Early Christian Church (Prizren)

The archaeological excavations conducted in two seasons; 2002 and 2004 at the Korisha fortress located at the area known by the toponomy as the ‘Gralishta’ hill, revealed contours and documented the plan of an early Christian church of the 6th century AD. The Korisha early Christian church which is located inside the fortress has an apse oriented toward the east. Inside the church, traces of a cintron are constructed in the form of stairs and in the shape of trapeze. Within the altar area of the church parts of the banisters were documented. The movable archaeological material, abundant and diverse findings were recorded here, which, besides the Late Antique date, the fragments of pottery of the Middle Bronze Age were evidenced also, which most probably are related with the Bronze Age site situate only few hundred meters northeast from the fortress. Nonetheless, many amphoras’s, pithos, jars, jugs, etc. where discovered, of the Late Antique date, which confirms occupancy of the fortress and the church during the 4th-6th century AD. 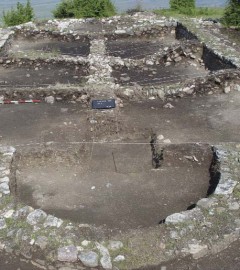 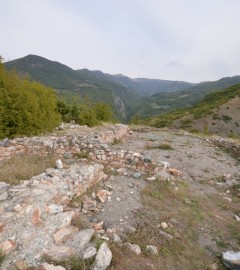